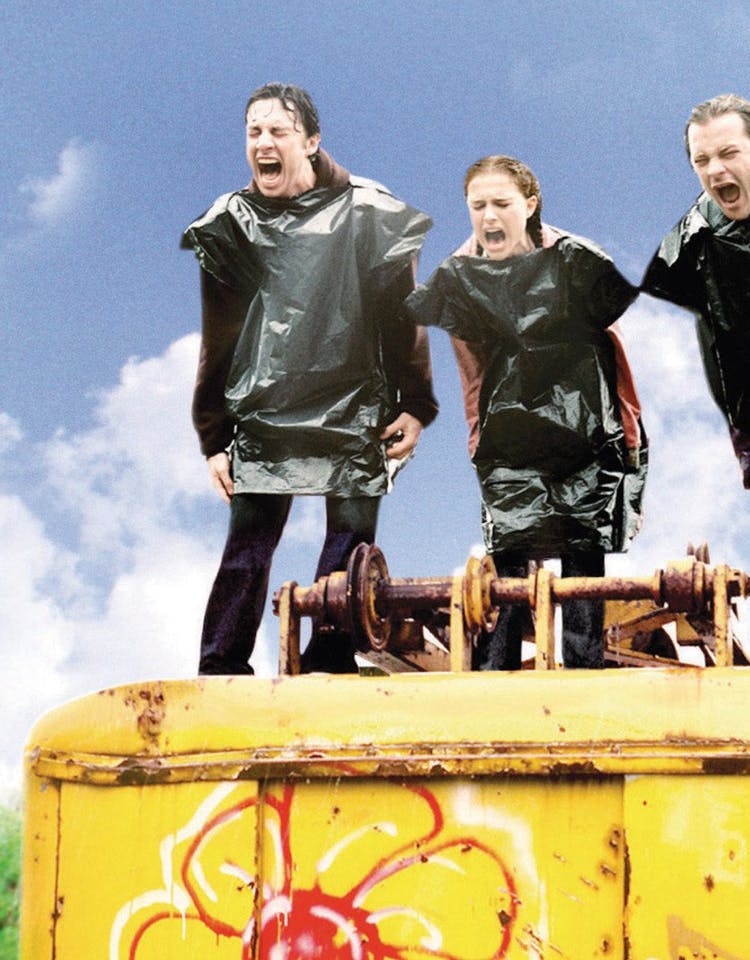 Have you done your homework? In the intro to this series I asked you to read Michael Chabon’s essay What’s the Point and then also to watch Garden State (2004). If you didn’t do one or both of these things, though, stick around because I think we can muddle through.

Chabon’s essay came out in September 2019 which makes it quite contemporary. And he seems to be going through something of a crisis of purpose: why make art, why care, that sort of thing. He spends a lot of the essay despairing, which, in the age of trump, isn’t that surprising:

...not only is the world not a better place — it has, in so many ways, gotten so much worse.

...maybe the purpose of art, the blessing of art, has nothing to do with improvement, with amelioration, with making this heartbreaking world, this savage and dopey nation, a better place.

But he concludes that the truth of art, that the reason we soldier on, is to say “you are not alone” - to keep people from despairing and turning completely to selfishness.
In this he matches my thoughts on the subject, which I mentioned in the intro to this series. I wrote that useful artistic communication must attempt to move us towards a more equitable and just society. Here I want to go a bit farther, and add that non-artistic communication - like, say, cheap entertainment - moves us away from this goal.

Not all communication is art, exactly - something like a bad romcom is much easier to classify as “entertainment”. Someone yelling about american politics online isn’t artistic.
But even entertainment, or people yelling at people, has an effect on the cultural discourse. Especially when it’s entertainment, when it’s not trying to communicate deliberately, when nobody is thinking about the exact effect the communication is having - in Chabonian terms, when nobody has tried to use this communication to remind anyone that we’re in this together - the effect is anti-art.
That’s because unlike people yelling about politics, which you know to ignore most of the time, entertainment gets past our defenses. Usually we don’t deliberately pay attention to what media does to us - we just let it in, which has the effect of cementing the discourse in its current form. Consume this media, don’t think about anything, just accept everything as it is. Let’s not change.

How we communicate is who we are

Who we are right now is a broken, highly stratified and unfair society. If communication in the form of entertainment does NOT strive to remind that we are not alone, to slowly but surely move the discourse towards a more equitable society, then even though you can argue that it was never art, never meant to do that, I think the more important point is that through the apathy it engenders and encourages, it becomes anti-art, anti-change, and regressive. And regressive is what we want to avoid, unless you’re planning to join the young republicans.

Garden State in particular has this problem because of its ending. I bring up Garden State deliberately, because it’s almost a movie that has something helpful in it. It certainly tries to bring a sense of wonder, of magic, to its setting. Various “deep” moments occur in the movie that do make you think deep thoughts.

When the characters yell into a bottomless pit together, for example.
Or when they visit the house of a bored, rich friend who shoots a flaming arrow into the air, and then they all stumble around as it falls, trying not to get hit. These moments really do make us think, and what they make us think is, “How can I be a better person?”! That people still talk about this movie today, that it has attained cult status, is proof positive that those thoughts had an impact on a generation.

The journey of the movie is a redemptive arc of the main character going from estranged, highly medicated, and completely numb to someone who cares about someone else, about his family and about his life.
And yet, at the end, we have this moment that defies logic, defies the world, that almost all simple romantic entertainment seems to suffer from. The two characters get together and live happily ever after.

Cheesy! Cheesy is what happens when you deny the darkness around you.

I don’t want to say, exactly, that no revolutionary art can end with the two characters falling in love and setting aside their problems and just being happy, but I don’t think it sends a useful message. I think it cements the discourse. It says, “don’t worry about anything, we’ve already solved it”. Forget that Braff’s character is deeply broken, as evidenced by the entire movie, forget that his idea to go back to LA where he lives to sort his life out, before continuing their relationship, is the sensible thing to do, the thing that anyone would do. Forget that she should come to LA with him if she wants to stay together in that very moment, that nobody would just randomly stay in New Jersey with no plan. No, I’m sure it’ll all just work out great. We’ll just sit here crying and kissing and looking at each other for the rest of time.

…Anyway, I guess my point is that when the ending of a romcom tells the audience to ignore the bad parts of life because everything will just hand wave work out, the underlying message is that that’s true about society as well. Because how could it not be. Look at them kissing. It’s fine.

And I would argue that Garden State in particular has set a high bar for itself, which it then spectacularly fails to clear. By being “deep” and “quirky”, by trying to set itself apart from more conventional entertainment, it’s making a claim to art. It’s saying “I’m special”. So by ending as it does, the effect it has is so much more insidious. First it has us let down our guards and really think that we might learn something, and then it teaches us that everything is OK just as it is.
Remember, this was filmed and then came out in the middle of george W’s first term, when people were still coming to terms with the idea of another smooth-brained puppet for president. Of another 4 (and then 8) years of regressive policies and pointless wars. Not that americans should ever be told that everything is ok, not that Clinton was so wonderful, but.

I’d like to imagine a world where Garden State ends on a melancholy note. A world where we’re not afraid to tell it like it is. To say that yes, these people are broken, and maybe they won’t make the greatest decisions, but let’s be with them and learn from them because we’re all together in this. And even if they don’t stay together now, even if Zack Braff leaves, and Natalie Portman cries all night, and we don’t know how their futures work out, let’s cry with them so that we can still hold out a little hope.
In that world, a world where the movie stands up to its deep and quirky ideals, I’d like to think that some people come out of the theater shaking their heads, wondering what they can do to connect with the people around them, what they can do to clean up their lives, or to find the kind of love that leaves you crying in an airport in the first place.

Thanks for sticking with me through part 1 - part 2 is a multimedia exploration of cheesiness in music. Here again is the link to the intro piece outlining my full plan.
Through pain and love,
Eli

« Revolutionary Art Tradition and the end of art »