Something happened to me six months ago that changed my life forever, but I’ve waited this long to write about it because I had to be sure it would last: my back doesn’t hurt anymore.

I’ve had back pain most of the time, sometimes better, sometimes worse, ever since a 2014 weightlifting injury. A poorly conceived sideways lifting motion led to a morning of soreness that sort of never went away, instead transforming into aches and shooting pains and an inability to bend over or sit in a chair for very long.

That’s seven years of believing I was stuck with what was essentially a light disability. Seven years of avoiding backless benches, barely being able to drive, changing out the handlebars on my bike to be able to sit upright, brushing my teeth so as not to lean over the sink too far, always bending at the knees to pick up anything, working at a standing desk, only ever using a couch in a fully reclined position. Seven years of physical therapy, yoga, chiropractors, famous back doctors, acupuncture, heated blankets, numbing pads, numbing cream, and ibuprofen.

Six months ago I read two books about back pain, and now I have a full range of motion without any interventions, medications, or alterations of movement patterns. One of the books was totally brilliant and interesting and helpful but utterly wrong, and the other was unnecessarily long, kind of crazy, but completely life-changing. 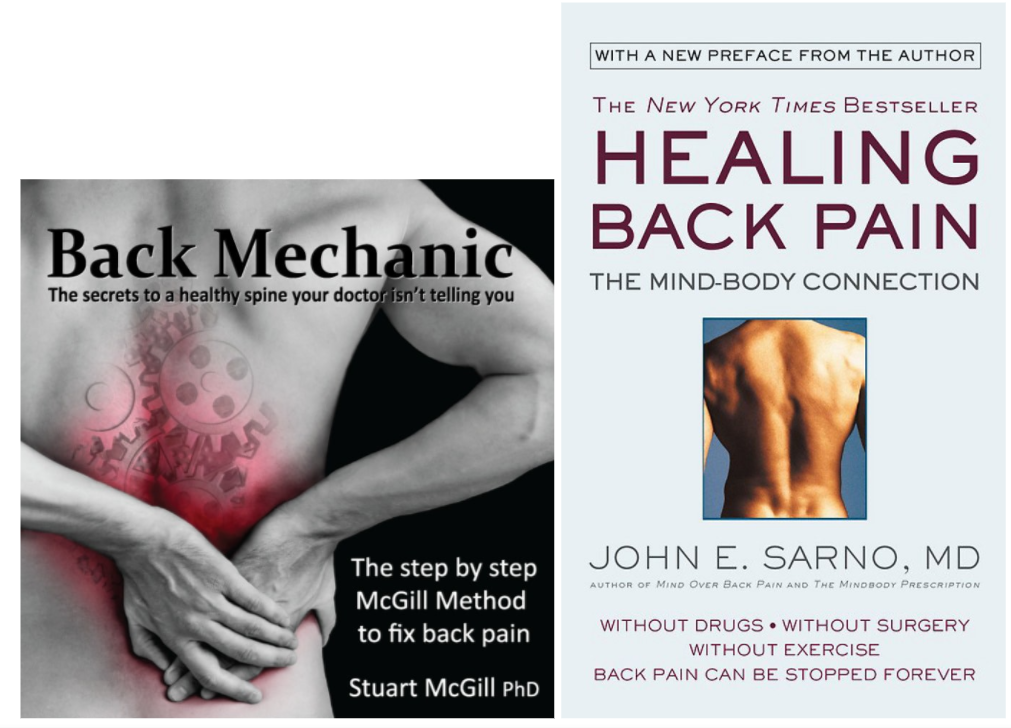 Back Mechanic is written by a brilliant doctor and back expert named Stuart McGill. What’s great about this book is how deeply it tries to help you diagnose and understand exactly what’s going on with your back (kind of as you’d expect, given the title). It helped me conclude that I had a herniated disk. What Dr McGill teaches in such cases is that it takes a very long time for the back to heal but that, even worse, any motions that further push out your disk can actually reset your healing.

The theory of the Back Mechanic is that you need to completely retrain your movement patterns to never make any painful motions, in order to leave your spine alone for a lengthy (sometimes multi-year) healing process.

I went through the exercises in the book and devoured every word. I was, at that point six months ago, completely fed up with my (actually worsening) back pain, and I was willing to try anything. The prospect of retraining my every daily movement and avoiding any stressors on my back for two full years seemed entirely worthwhile if it meant an eventual return to normal. I would have embarked on that journey, too, if I hadn’t then come across a different book with a very different solution.

Healing Back Pain was written by another brilliant doctor and back expert, the now-deceased John E. Sarno. But the two doctors’ theories couldn’t be more different.

The theory of Healing Back Pain is that chronic back pain, once you’ve gotten past the initial injury stage, is a learned neural condition that can be unlearned with sufficient intention.

Sounds pretty weird and/or made up, yes? But this is what actually healed me.

The moment I started to truly believe Sarno was when I read in his book that chronic back pain, for the majority of injuries, just doesn’t make sense from a physical perspective. He claimed that the body is pretty good at healing, and especially at healing essential functions. So why, he asked, would we expect it to take years to heal the spine? He said that if your back hurt from an injury sustained years earlier, there was a good chance you had already healed, and your current pain was no longer from the injury.

Dr. Sarno calls this TMS: Tension Myoneural Syndrome. My lay understanding is that for whatever reason, we learn to associate feelings of movement in the affected site with feelings of pain. For months after the injury, we felt actual pain when we moved the affected area, so we learned to flinch away from that sensation, and fear it. We burned those reactions into our muscle memory. And then, forever after, we continue to flinch and fear sensations in that area, even though the tissue has healed. This fear reaction essentially trains our brain to expect pain, and thus we associate movement in the back with pain, and feel actual pain.

Dr. Sarno is careful to reiterate throughout that what the patient feels is, indeed, actual pain. And I think he’s right - pain is experienced in the mind, and regardless of what is causing it, the sensation of that pain is real to the person experiencing it. So the healing moment for me was literally as I was reading this book - Dr. Sarno writes that you can accept the pain and understand that it won’t get worse. You can make the motions you’ve been avoiding, even if they feel painful, because that doesn’t mean you’re actually damaging yourself further. That was it - it was at that moment that I was healed from my seven year malady, and I didn’t even know it yet. But he was (at least for me) completely right.

Note that this is the complete opposite of Dr. McGill’s advice. McGill says that the smallest push against your disk in the wrong direction will set you back and damage you more. Dr. Sarno says that you’re already healed, but that you have to prove it to yourself by pushing your disks in the “wrong” (ie, painful) direction and that you needn’t worry, it won’t damage you more. You have to actually believe that this is the case for it to work.

The day I read through Healing Back Pain (and quite quickly, because it’s full of fluff and there really isn’t much more to it than what I’ve written here), I was at my in-laws’ house in Ohio, having driven there 5 hours from Chicago. I had also driven the week before after a dinner party, and I had spent the next 5 days in excruciating pain, hardly able to move, availing myself of every OTC pain med and every other learned coping mechanism I knew. There was something about the way that the Honda seat kept me in a single position for a prolonged period (because my feet had to be on the pedals).

But the day after reading this book I was already a changed man. That night I had done a bunch of forward back bends for the first time in 7 years. They hurt, but I told myself I was actually just feeling movement, not pain. That my back was actually healed and wouldn’t be damaged by a normal range of motion. In the morning I woke up with 90% less pain than I was used to. It’s crazy but it was also that simple. I spent all day attempting to just live my normal life without thinking about pain, and repeating a sort of mantra to myself, “it’s just normal movement, you’re just feeling your spine move around, it won’t get worse.”

The next day we were scheduled to drive back to Chicago and I insisted on driving most of the way home. I focused on the sensations and told myself it wasn’t pain. It still felt a little sore but I reminded myself that a little soreness did not necessarily imply that I was doing long term damage. For me the key to the entire thing has been accepting that I need not fear long term damage. My back is healed, actually. And it worked - unlike the week previous, where a single 45 minute drive had ruined my entire week, I drove nearly 5 hours straight and experienced no pain the next day.

It’s worth noting that I now believe that most people who succeed in healing by following Dr. McGill’s advice (avoid all painful movements for two full years by retraining your entire life to avoid certain situations and positions) are actually healing by following Dr. Sarno’s advice, without even knowing it - after two years of never feeling back pain because you’ve literally never once moved in a painful direction, your muscle memory of painful movement has faded, and your psychosomatic pain has healed.

This has obviously been a wonderful change in my life, but it’s also been kind of nuts. I feel crazy. What does it mean for my own self-conception of my sanity that this debilitating illness has been in my head the entire time? Even though Dr. Sarno is careful to reiterate that this is a real condition that people experience frequently, and not just in their heads (that the muscles and ligaments are deeply involved in said “muscle memory”) I feel like an idiot for not having fixed myself sooner.

It also raises some interesting questions that I’d like to explore further. What is the difference between “in your head” and “in your body”? Now whenever I have any other physical malady, I find myself asking if it’s real. I no longer trust my own physical sensations and diagnoses. If I have a headache, is it “in my head”? Can I just tell myself, “ignore it, it won’t get worse, it doesn’t imply any deeper issues, it’s just a random headache and you only have to feel it if you want to”? One thing for sure about headaches, at least for me, is that if I take ibuprofen sooner, I can nip it in the bud, but if I wait, it often gets worse to the point where ibuprofen doesn’t help as much. So by attempting this “mind over matter” fix, I could be making things harder for myself. But I have sometimes successfully ignored a headache until it’s gone away. And certainly I’d prefer to take less medication in general.

If I am one day having digestive issues, can I wish those away as well? Seems less likely. But are not all parts of my body connected through my brain? At what level of mental power training will I be able to instruct my stomach to resume its regular duties? Certainly, there are various ways that tension can interrupt the normal functioning of a digestive system. I’ve even begun to recognize the difference between anxiety stomach responses and “bad food” or “illness” stomach responses. But the existence of the latter does seem to prove that some things are not in the mind alone. If you break your arm, you can’t think it healed.

One conclusion I will draw is that my meditation practice has been an integral part of my back healing - meditation increases mental power, and it’s mental power that allows you to retrain your mind’s learned reactions. Without mental power, you fall into old thinking patterns without meaning to, which in this case would mean interpreting back movements as back pain. Cultivate mental power and you cultivate control - control over your body, reactions, habits, sensations, and pains.