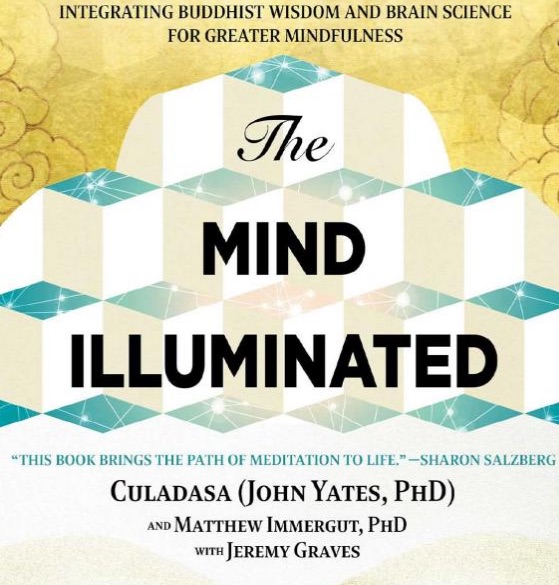 I, Eli, humbly beg you, the reader - start a meditation practice. Give it a try. It is the single most impactful thing that has happened to me in the last 18 months, and the second most in my adult life. I don’t see why it should be any different for you. You’re just as human as anyone else, right? You have a brain, and a mind. And unless you’ve already gotten your own practice off the ground, you probably haven’t explored the difference between the two, or used one to achieve any sort of mastery over the other. That’s what John Yates’s book The Mind Illuminated is about, or at least, that’s what the first few chapters are about. Why would anyone want to write a book review of the first quarter of a book, I’m sort of asking myself. All I’ve learned thus far is how to train my focus, and I think I have a long way to go on that front alone. But according to Dr. Yates, that’s the hardest part, and that’s all you need to do for the first few months of training.

I’ve actually been meditating on and off, sometimes for months on end, for almost ten years! but never until I read this book have I made any progress on the focus-training. I stubbornly thought I could piece together half-remembered advice from friends and DIY the thing. I’m here to tell you that this is false. It helped immensely to have specific, pragmatic, easy to follow steps and tips. I went from sitting 10 minutes at a time in a mostly distracted state of mind-wandering to sitting 45 minutes every morning in a state that’s more focused every day. So don’t just sit around with vague intentions.

You are trying to train your focus, which means you have accepted a sort of dual theory of mind - there is your brain, the organ that thinks and controls your body, and there is your mind, your self, the thing that is ultimately trying to survive and thrive in this world. To train the focus is to grow the power of the mind, just like training any other muscle. It is to give yourself - your self - more power over the brain, that backstabbing, atavistic, horny hungry little jerk that makes our every living moment a struggle. And that is why I humbly beg you to try this. The history of contemporary society is a history of an inflection point - post-animal minds grasping to escape the animal instincts that keep us from achieving worthwhile existences. We are not there yet, but you, you personally, can get quite close by meditating.

Here are some powers I already feel myself growing, even though I’m clearly only at the beginning of a life-long study:

At the risk of stealing Yates’s thunder or just giving bad advice, here is what I do for 45 minutes, right before my coffee:

I don’t know what comes after this because I don’t want to read phase 4 of the book until I get comfortable in phase 3. So this is a 5 star review of a quarter of a book.

We could apply Marx’s critique of religion as “an opiate of the masses” to meditation. It would look something like: “Anything that helps the worker bear the injustices of capitalism will only prolong suffering and the inevitable revolution”. If meditation teaches self control and stoicism, then it makes it easier for me to work a dead-end job for the majority of my time, instead of agitating for meaningful change. That said, I don’t buy it. I think you could say that about yoga a bit more successfully. Yoga is easy to do (the mind can disengage while you blindly follow the leader) and feels good throughout and afterward (low effort, short term reward). It is good for your muscles but not for your head, besides generally relaxing you. Thus, if a bunch of yuppie white collar office workers go to yoga in the afternoon, I absolutely do buy that this is a salve that helps them ignore the awful conditions of our existence as indentured serfs to the capitalist bosses. But when you train the mind, you increase your ability to think, to plan, to achieve, to self-control. You start to question preconditions you’d taken for granted. I think it more likely, for most people, that this will increase your ability to throw off the shackles of our neoliberal prison.

The terror of spirituality

Some people meditate and become totally different. Meditation can bring out some dark memories or insights that you maybe aren’t ready to handle, and even sometimes lead to suicide. This mostly happens to novices at intensive retreats though; I think approaching it from a gradual focus training perspective is pretty safe. But the fact that this happens at all is proof of the power of these techniques, and the absolutely life-changing effects they can have. I’m not sure what spirituality is (remember I haven’t gotten to chapter 4 yet), where it comes from, why you would want it, or whether it looks the same for everybody, but I do know that this all has something to do with the concept of “one-ness”. Yes it sounds woo woo, but just remember that if you’re unprepared, it might drive you insane, so how woo woo can it really be? As Flea says, “There are two kinds of people in the world. Those who know we are all connected and those who don’t.” I’m here to tell you that the barest taste of this one-ness is enough to convert anyone. The interconnectedness of all creation is so real that you don’t need to believe in it to feel it - take that, god.

In this space I’d like to make a promise to myself to keep up this practice and see where it goes. I’m making it publically to motivate myself but also to motivate you, dear reader - I started this post with a humble beg and I’ll finish by reiterating: if you haven’t tried it, training your focus is the most worthwhile thing you can do.