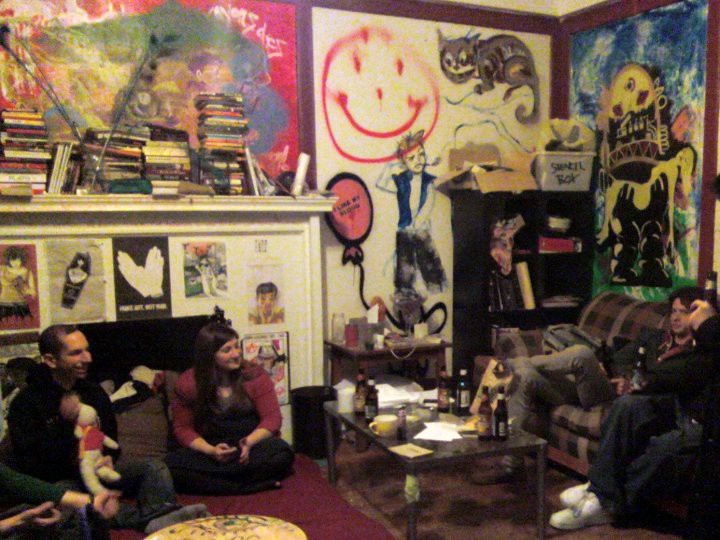 The following is a very personal account of what it was like living in 3.5 different communes over the last 6 years in Chicago. It’s meant to be a companion piece to Creating a Post-Scarcity Future, which looks at the economics of arrangements like these same communes from what I hope is a novel perspective. The communal living situations I’ve been in have many similarities, a few differences, and a few themes that I’ll highlight to try to tie the story together a little bit. I also managed to save a few pictures over the years, which is crazy lucky, since I usually avoid pictures at all cost.

The baohaus living room. That’s me on the left holding the monkey.

Summer ’09 — the moment I realized that the standard twentysomething apartment life would never be enough for me again. I moved into the baohaus, an already functional commune in Hyde Park, mostly knowing what I was about to get into — I’d been hanging out there for the better part of a year. This was not your standard apartment. What made it different was the number of people (somewhere between 5 and 7 or 8, depending on how you counted), cats (2–4), food sharing (communal fridge, communal meals [tho without any set schedule]), house meetings (weekly on sunday nights, mandatory), and an overall political punk aesthetic that valued both empathy and art for all sorts of reasons. we weren’t just roommates; we were friends and confidantes and occasional lovers. 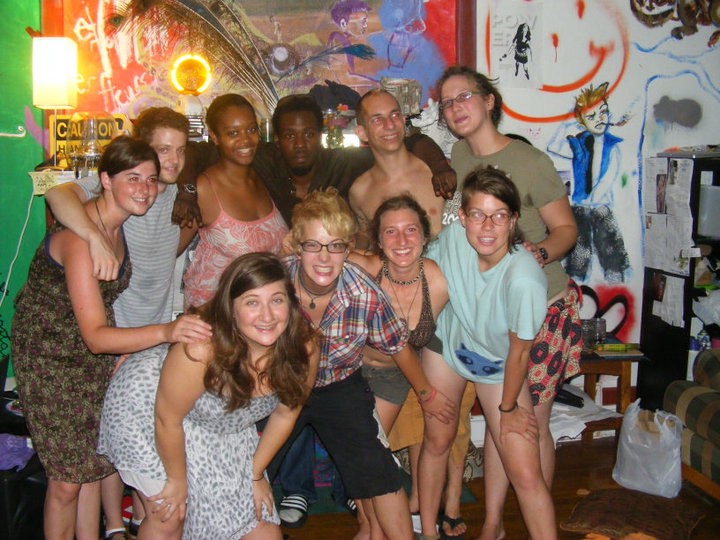 It was a very full year, one in which I woke up as a political creature. One motto that recurred frequently: “all friendship is political”. And that’s what we lived, and it was real, and weird, and good. And then half of us graduated college, of course, and mostly moved to the west coast. Because that’s what’s expected of a young anarchist in Chicago. Around that time I started a new relationship, so I decided to stay. The landlord kicked us out of that apartment (finally — they’d been trying for years) but my new partner managed to secure a lease to the unit directly above it. Hence the 3.5 in my description of # of communes, and hence the name of the new place: the nubao. About half of the original members of the baohaus moved upstairs. My new partner insisted on keeping the place clean (a “fresh slate” and all that), so it ended up looking (and becoming) pretty different. 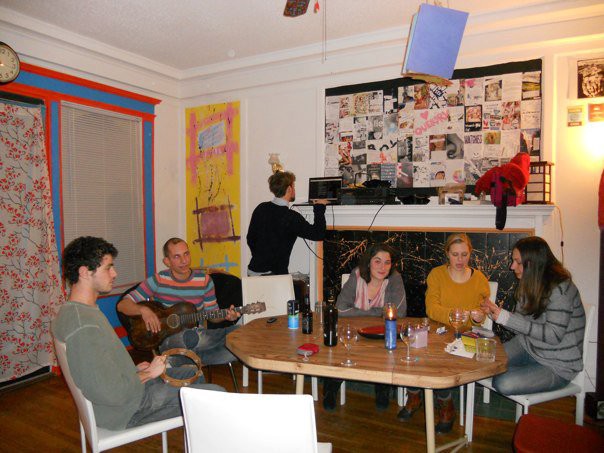 the living room of the nubao. My partner at the time (and brains behind the operation) in the yellow sweater.

We had an honest to goodness dining room table! Things were definitely more grown up. Random crustpunks no longer crashed on the living room floor. Rent was higher. House meetings still happened, but somehow had less vitality. We were no longer the social center for disaffected youth at the University of Chicago that we’d been in the baohaus — things were more private. We still had fun, and threw parties, but they were smaller, and less political. And I had obtained serious employ and was making what was, for me, at the time, serious dollars. 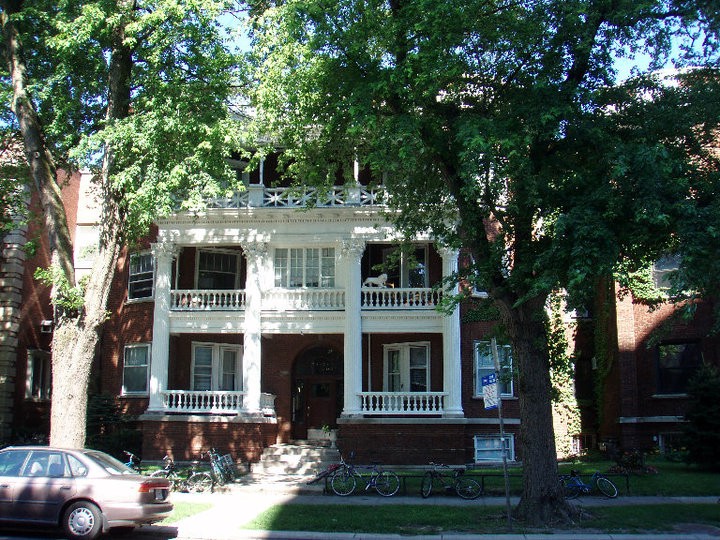 the magical buiilding with the two communes. Note the plaster lion on our front porch that we stole from a frat.

One of the roommates who lived in both communes, Dro, had a girlfriend who didn’t live with us. Dro is black, which seems important to this part of the story. One day one of the other roommates chanced to look into Dro’s room and noticed it was full of hastily packed and stacked boxes and suitcases. Turns out Dro’s girlfriend had been living in Dro’s room for weeks (months?) without anybody in the house noticing. That bedroom had a weird little sink in the closet, and she’d been peeing in it when she didn’t want to be seen walking to the bathroom. This brought up all sorts of really sticky questions. Why didn’t she want us to see her? Why didn’t Dro ask if she could move in? How did we not notice someone living exclusively in our house for so long? To be clear, I mean all of these questions as an indictment of the atmosphere at the nubao — it started to become clear that despite our enlightened politics, such as they were, we may have missed the point. Or maybe the slide into respectability that my ex precipitated had taken its toll. She later had a falling out with another roommate, things really went downhill, and the whole “communal” part dissolved after that first year. I moved out. 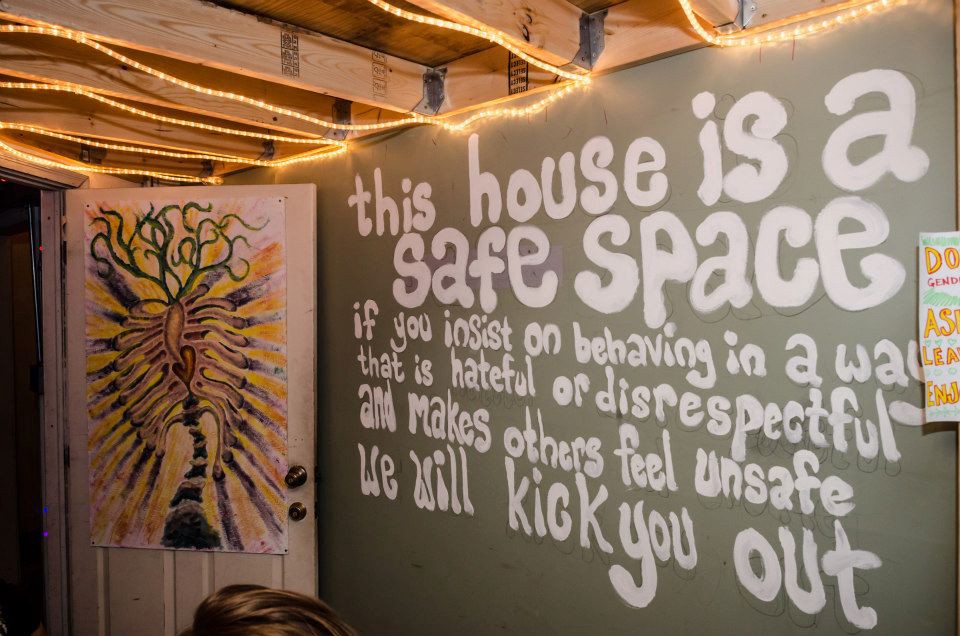 front entrance of the ribcage. note the diy loft above. also note: took us 4 hours to get the wording for the sentence on the wall.

Summer ’12 — The summer I regained my love of all things communal. I’ll never forget the moment I walked into what was to become the ribcage, having responded to a poorly worded, completely pictureless craigslist ad on a hunch. A huge, decrepit, wood-floored, brick walled, brightly lit space with 1.5 bathrooms and four prebuilt bedrooms in lakeview awaited. What a find! We (being myself and one original member of the nubao, now romantically entangled) set about finding a solid crew to try and start an underground diy queer punk political radical communal event space. You know, as you do… 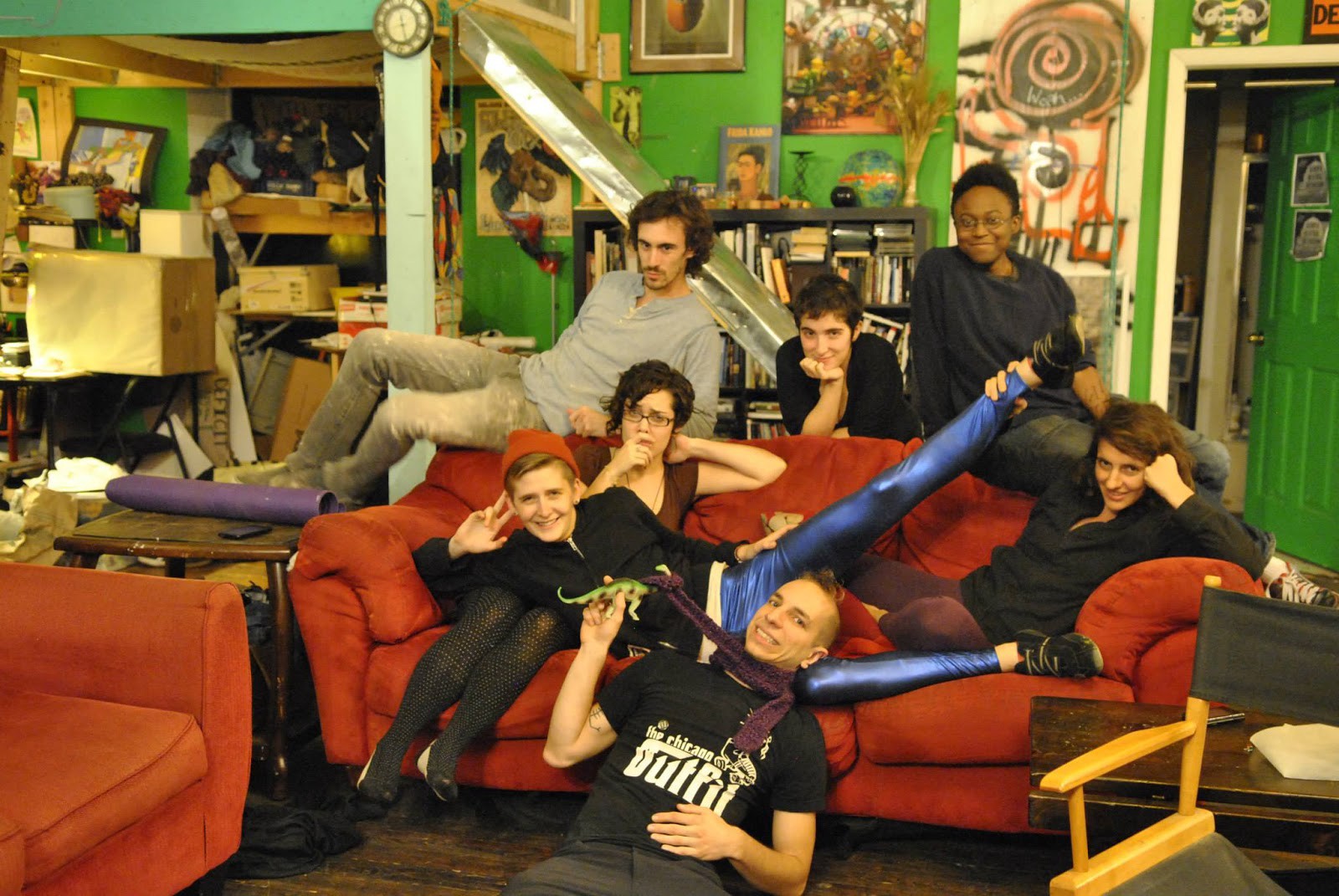 the ribcage crew. That’s my ex in the middle back row. Also note the homemade slide coming out of the homemade loft behind us.

Some things were very similar to the baohaus. Lots of guests sleeping over all the time. Mandatory house meetings sunday nights. Agonizing hours spent constructing a shared political view that we could try to live by in (theoretical) harmony. Communal food and many shared meals. Those were things that all worked really well, and I was happy they carried over. New at the ribcage were the events — we all wanted to use the preponderance of space to help community organizing groups in the city throw events, which mostly took the form of fundraisers, workshops, and meetings. We probably had an average of 1 larger and 2 smaller events every week for 2 years. And we never charged anyone to use the space. Never even took “donations” at the door! It was a labor of love. 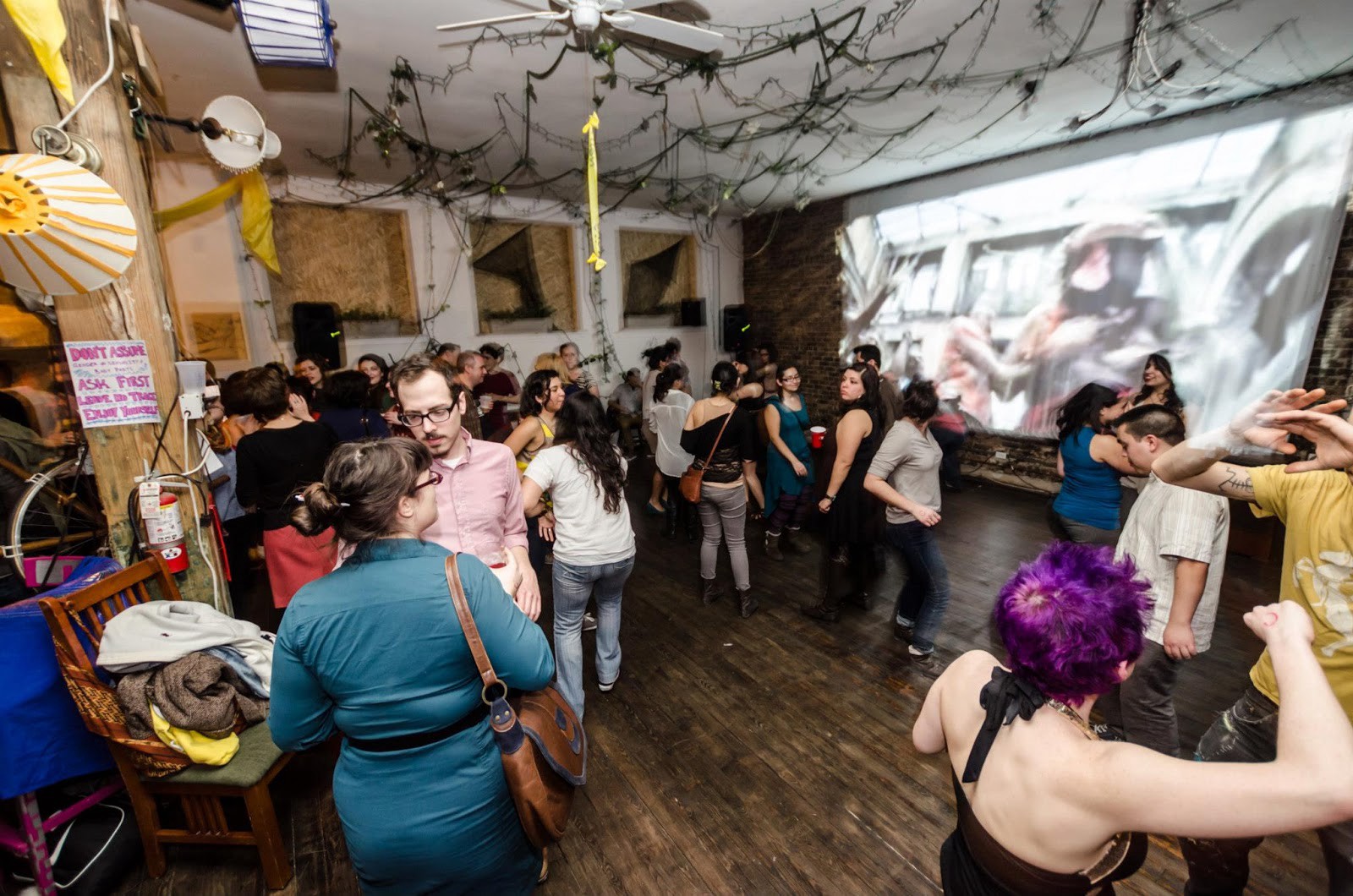 An Occupy Chicago fundraiser at the ribcage. note the homemade big ole projector screen and the diy soundproofing in the windows. Also the sideways lamps on the left (that was my idea).

One thing the ribcage was not was cheap. We paid $3700 every month for 2 years. Just getting the lease took $3700 (first month’s rent) + $3700 (security deposit). I put that entire batch up myself. Even with 7 people living there full time (we built three lofts), $528 + utilities was more than some of our crew could pay. We made the deliberate decision early on to make the place “pay as you can”. The political reasoning behind this was to make sure that money trouble didn’t become a dividing factor between house members. The theory behind it was that some members’ financial advantages didn’t necessarily imply that those members were better, or necessarily deserved to have more money. So if we could neutralize these differences in a way that everyone could afford and accept, that much the better. As a highly-paid web developer by this time, I paid roughly $1000 each month. One of the lofts was completely rent-free by design. Sort of an “artist in residence”. 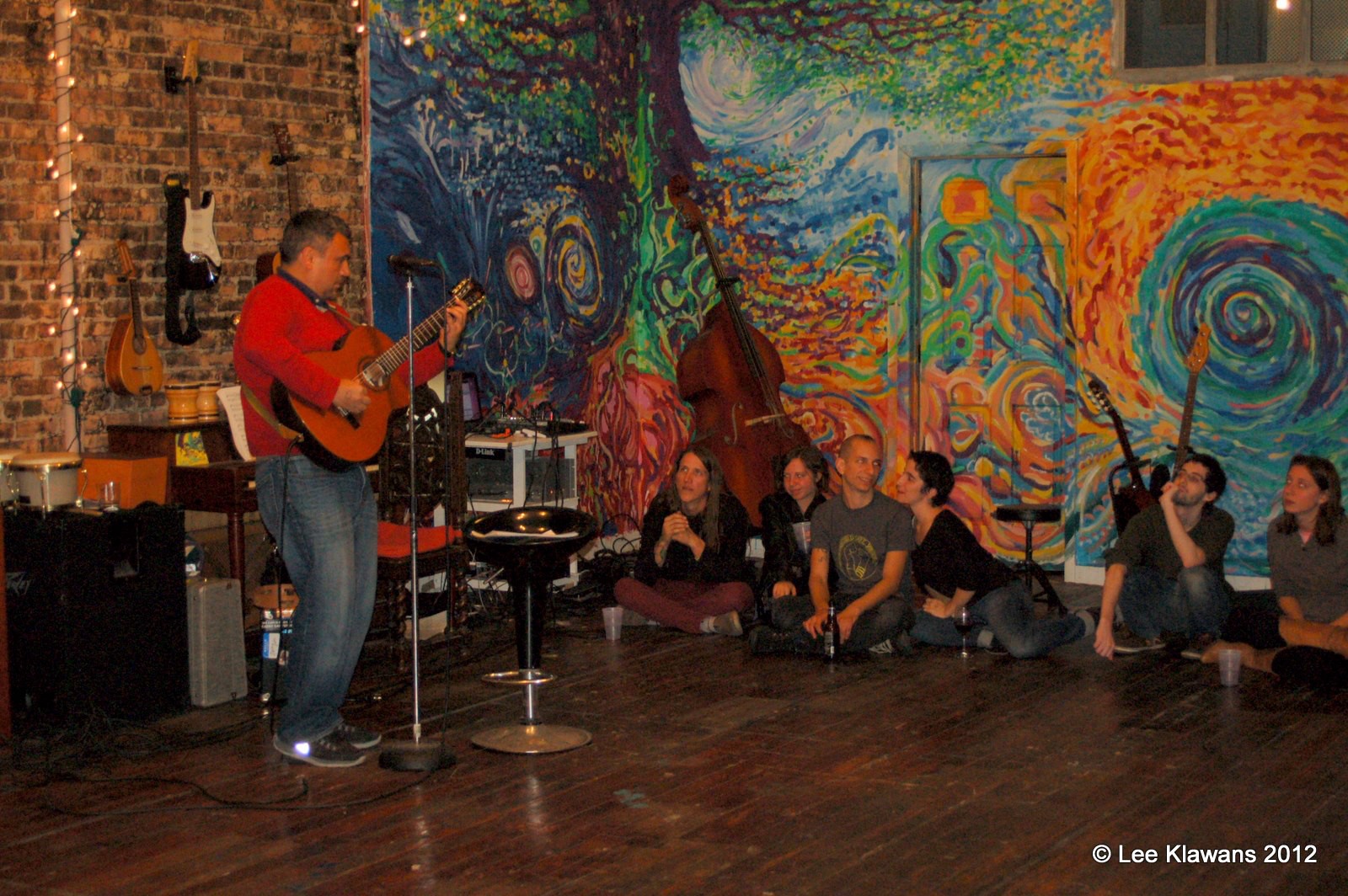 acoustic show. most of the crowd is to the right out of frame. we all adored the mural we created together — I heard that the people who moved in after us painted over it right away.

I’m really glad for the experience that was the ribcage, and I wouldn’t trade it for the world. But lots of things didn’t work. We were all white, except for one person of color who stayed as a resident for a year. I don’t have anything against all-white communes, but trying to help throw community organizing events in Chicago (a very racially divided city, in case you didnt know) for communities that often consisted largely of people of color made this complicated. It might have been better to have started with a more balanced group in mind. Not saying that that would have definitely been an improvement, or that I even would have been able to find the right people. Honestly, I still don’t know. But it’s something I think about a lot. Race and money are both contentious, awkward issues to talk about, let alone to try to live out an experiment about. Imagine how the “pay as you can” situation would have worked with more of a racial divide in the house. When you let your experimental, controversial (aka not status quo) politics dominate your living situation, you end up taking big risks in very sensitive places. You have a lot to lose. The ribcage dissolved after 2 years amidst horrible (and political) tensions between myself and another house member. My relationship ended. I moved out a couple months early, altho I still covered my (higher) rent until the end of the lease. 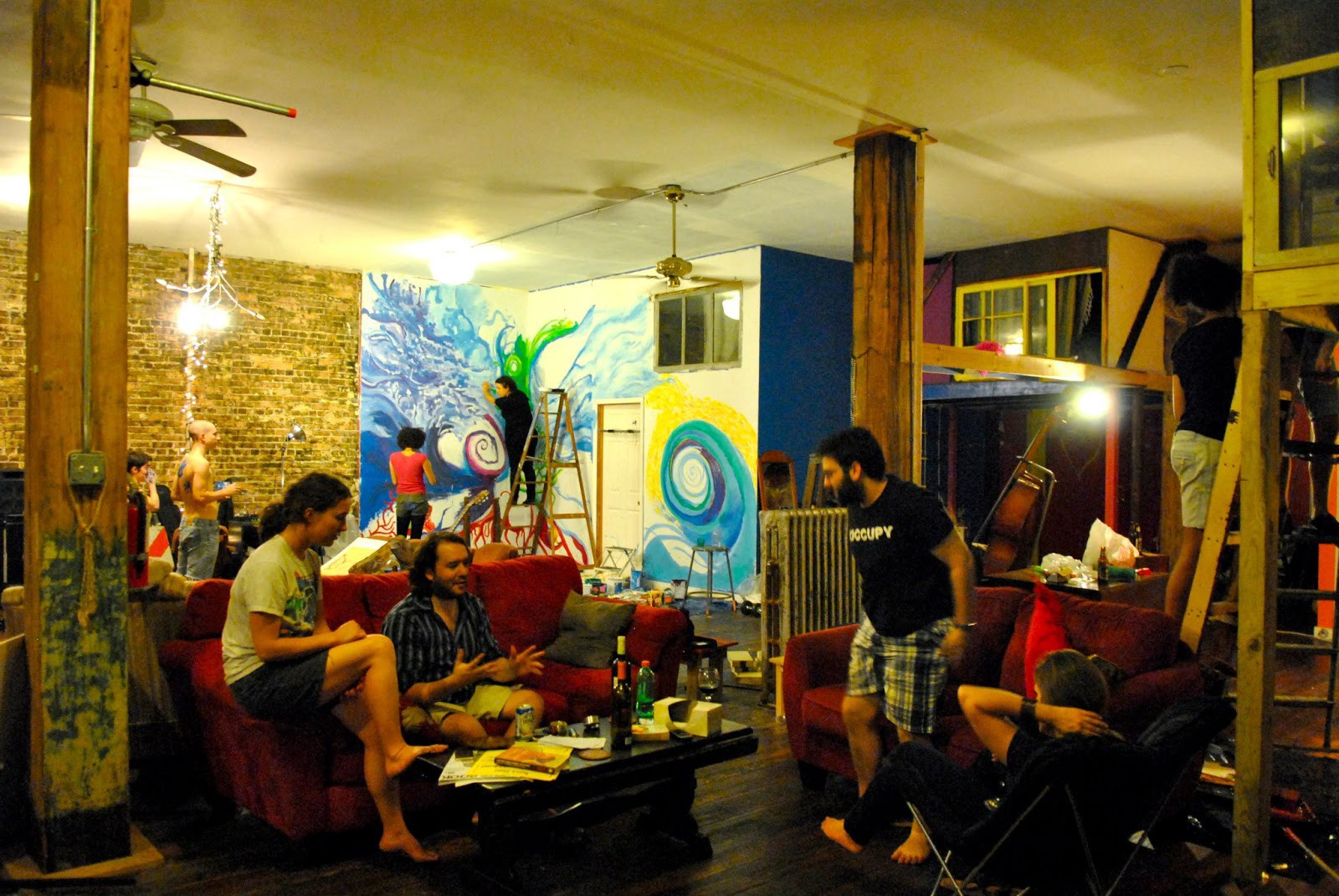 painting the big mural at the ribcage. Oh, yes, those were good times.

I took a year off of communes after that. Actually swore to grow up and stop being so idealistic. So where am I now? Well last year I bought a house in west logan square, and I’m about to start a new commune. I call it the crumble house. It’s pretty crumbly and old, which is great, because there’s really not much chance of making it worse. I’ve been doing a ton of fixer-upping in my spare time here, and the house has gone from a mess to a beautiful mess. 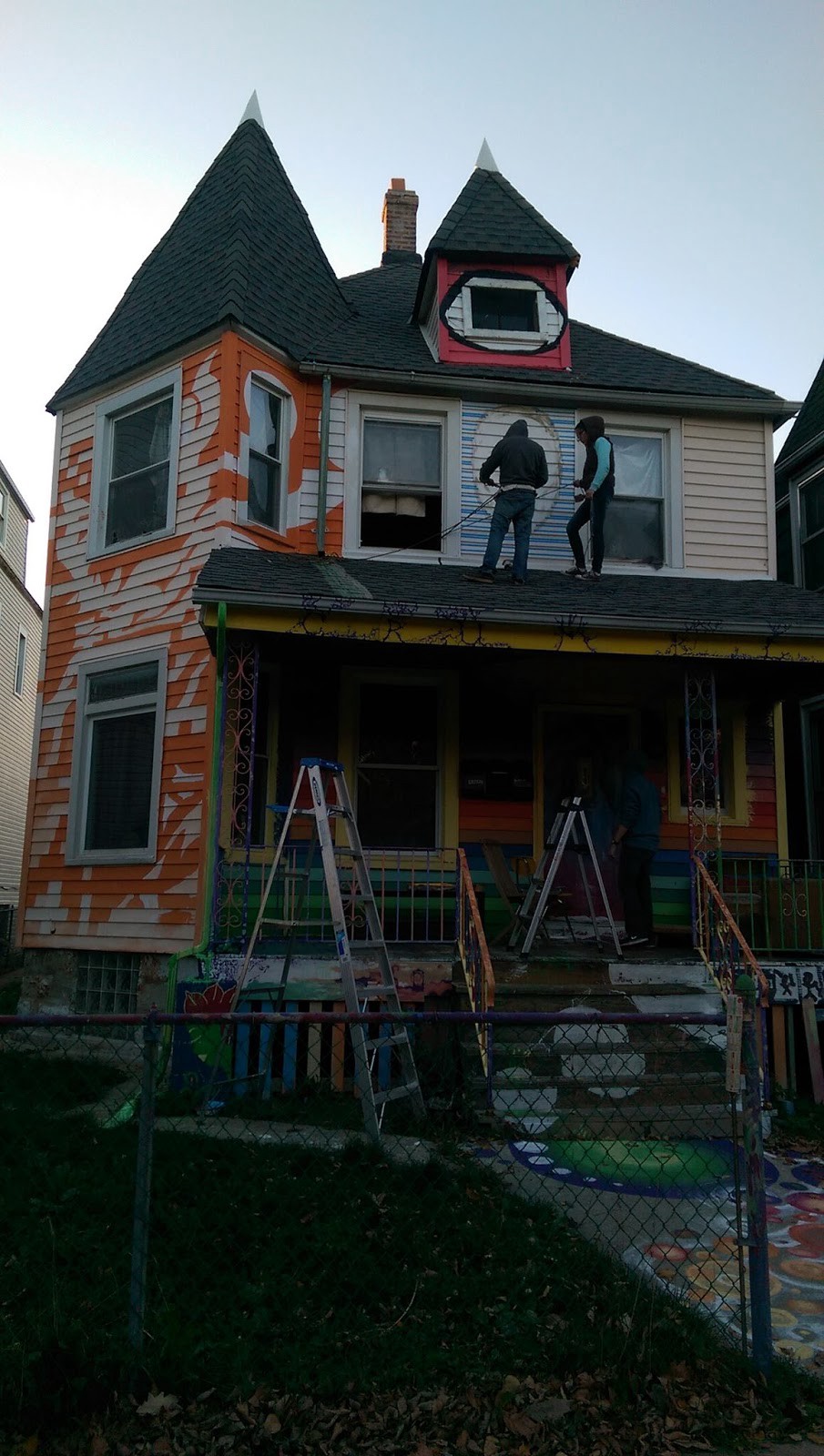 the crumble house. decoration is a constant work in progress.

One of the big differences here is that I own the place. At the nubao and the ribcage, when things went south and I’d tried and failed to fix them, I just up and left. I don’t really have that option here. I mean I guess I could theoretically rent out my room but retain ownership, but that sounds like a huge hassle. So where does that leave me for when things (inevitably?) fall apart? My current plan is to sit down with the first critical mass of housemates (currently four of us, soon to be 6, 7, maybe even 8!!) and draw up a sort of charter. A list of all the behaviors we agree to live by. A list of reasons for summary expulsion, not to be added to without everyone’s agreement. Hopefully this will help me cover myself a bit. Meanwhile a lot of aesthetic and functional points haven’t changed all that much — tons of art, focus on events and community building, lots of communal food. Life is good… 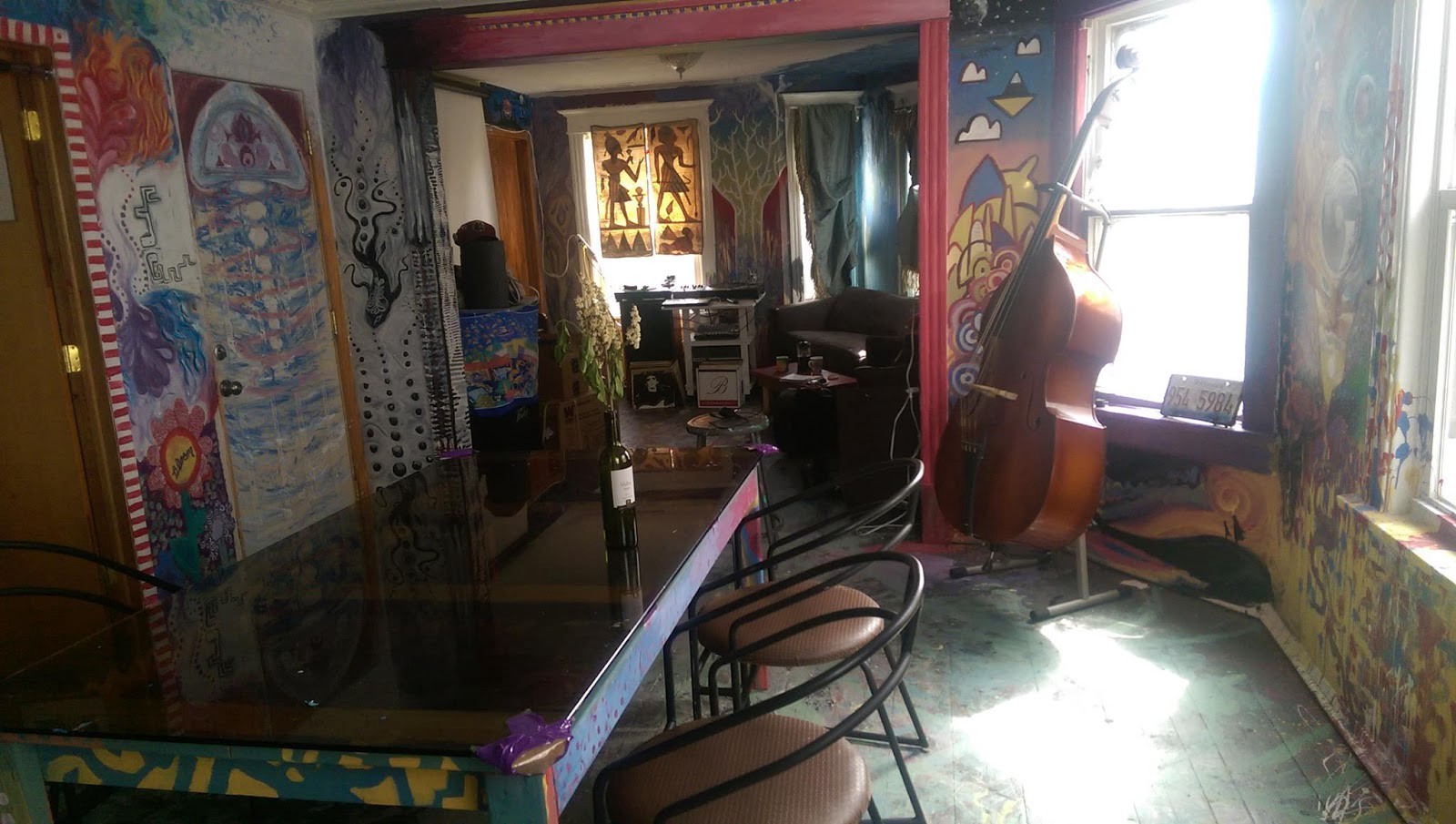 Another big difference is money. It’s still pay as you can (at least, there’s definitely some wiggle room), but instead of collectively pay as you can-ing for an overpriced place, owning the building and paying a mortgage means everyone’s rent is cheap. This is definitely a position of strength. Monthly costs, including utilities, come out to around $400/person. And that includes extra money to set aside each month for house repairs and the occasional big-ticket item (my roommate really wants to redo one of the bathrooms). Things feel more mature, but not more status quo. Like as if I’d internalized a lot of the hard-fought lessons of the last two places and managed somehow to make a wise decision or two along the way. It’s early on in this particular burner punk art house’s life, but I can’t help but feel a certain optimism for the future.

« smart not hard The Tyranny of Dishes »