If you can’t remember it, you weren’t meant to know it.

I welcome you back, tongue firmly in cheek, to the second post in my series on making mistakes in the kitchen for fun and profit.

In our first adventure, we fried some ground beef. Let’s face it that’s not very hard. I made that post to respond to some people who’d told me they always consulted a recipe before cooking, and measured everything carefully, but really I don’t think it surprises anyone to know that you don’t necessarily need to do that.

The more let’s say controversial take would be that you don’t necessarily need to consult a recipe or measure ingredients when baking.

“Well”, I can hear you say, “that’s because we’ve memorized our favorite biscuit now ‘aven’t we?”

But you still measure out the flour. What I’m trying to ascertain in this series is if, by practicing and going with our intuition, we can learn to bake intuitively, such that we end up with a deeper understanding of the process and flow of it all.

We might not end up with our favorite biscuits, and what we do end up with might not be what we always intended, but it’ll be more interesting.

Today I decided to make some sort of pumpkin muffin per my wife’s request. I was inspired when I realized we had pumpkin puree and pumpkin butter already - in fact, we also already had flour, baking powder, eggs, butter, and some spices, so I didn’t need to shop for anything. From start to “in the oven” this whole thing took less than 15 minutes. 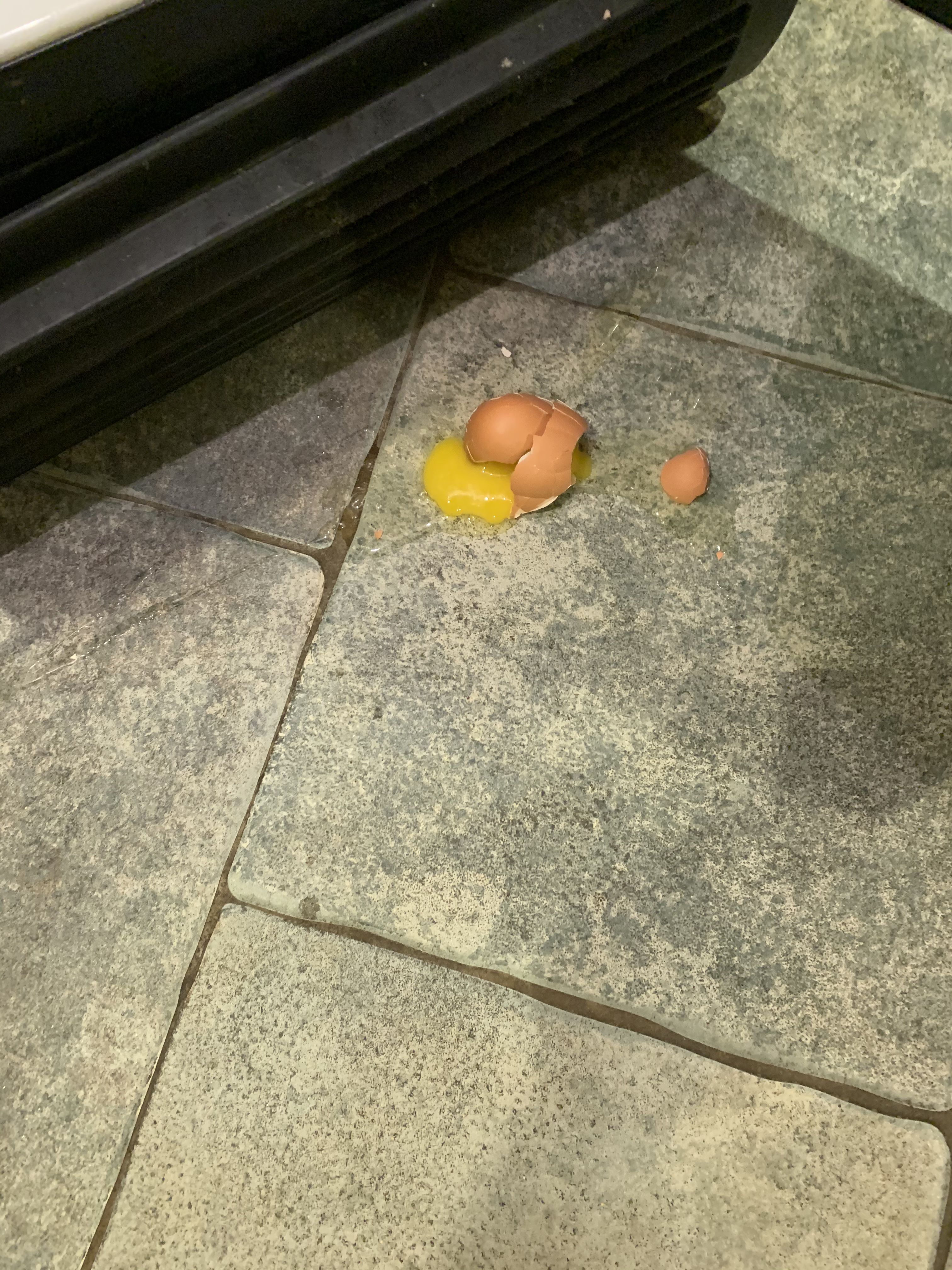 Off to a great start!

I preheated the oven to a decent temperature. My oven’s thermometer is never right anyway so I just pick a temperature for fun. Then I assembled the ingredients on the counter, letting intuition guide me. But I store everything more or less in the same place, so it’s hard to overlook the important stuff. 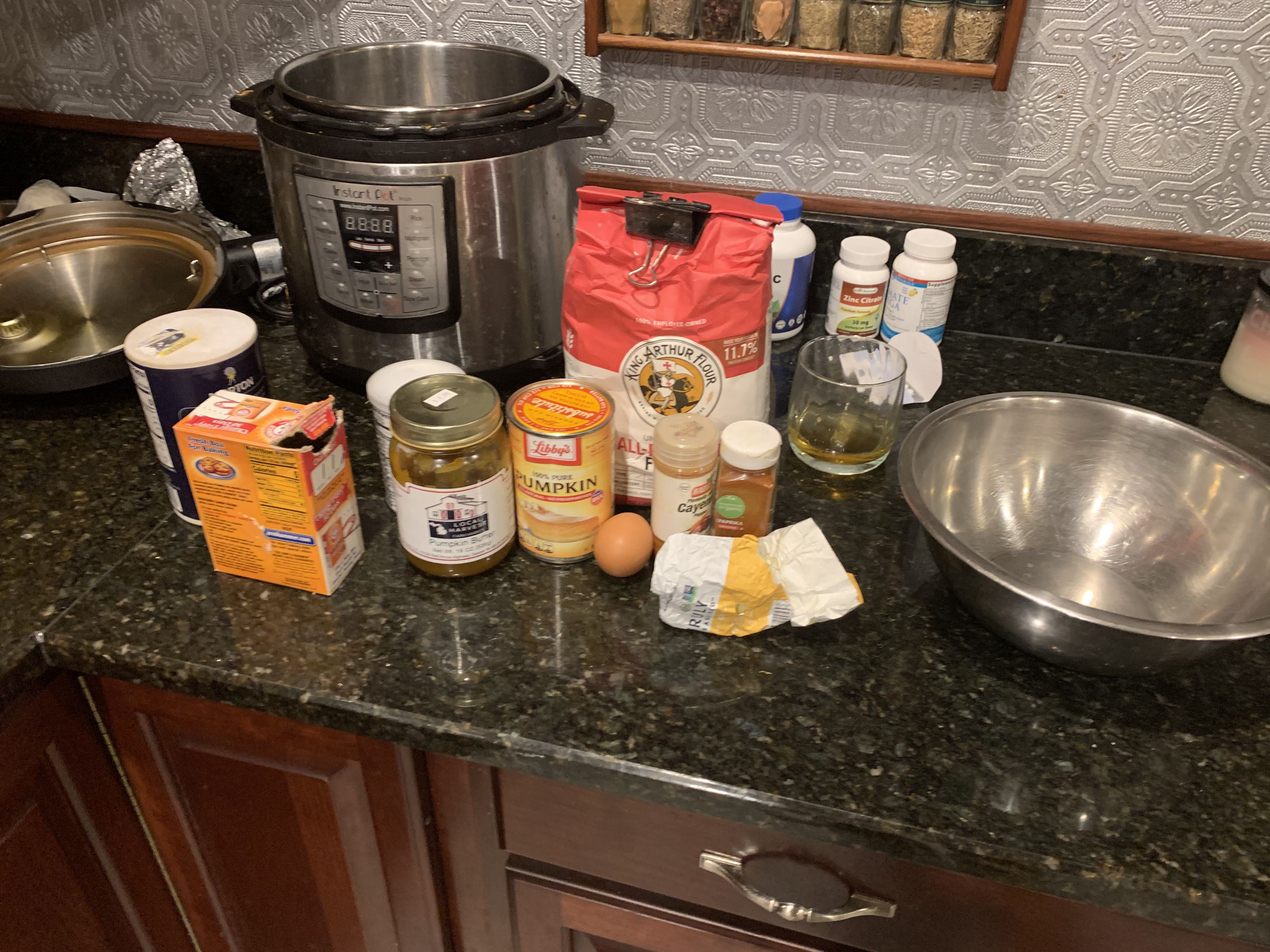 I was already one or two drinks in at this point and got myself a third as you can see there in front of the zinc tablets. Getting your third drink prepared before your hands get messy is a crucial step for impromptu 9pm pumpkin muffins.

I melted some butter (probably a single stick or so) in the microwave and mixed it in with the egg, a really healthy few dollops of pumpkin butter, and the pumpkin puree. Couldn’t decide whether to use all the puree or not until I realized that if I didn’t, I’d never use it for anything else and it would go to waste so in it went. 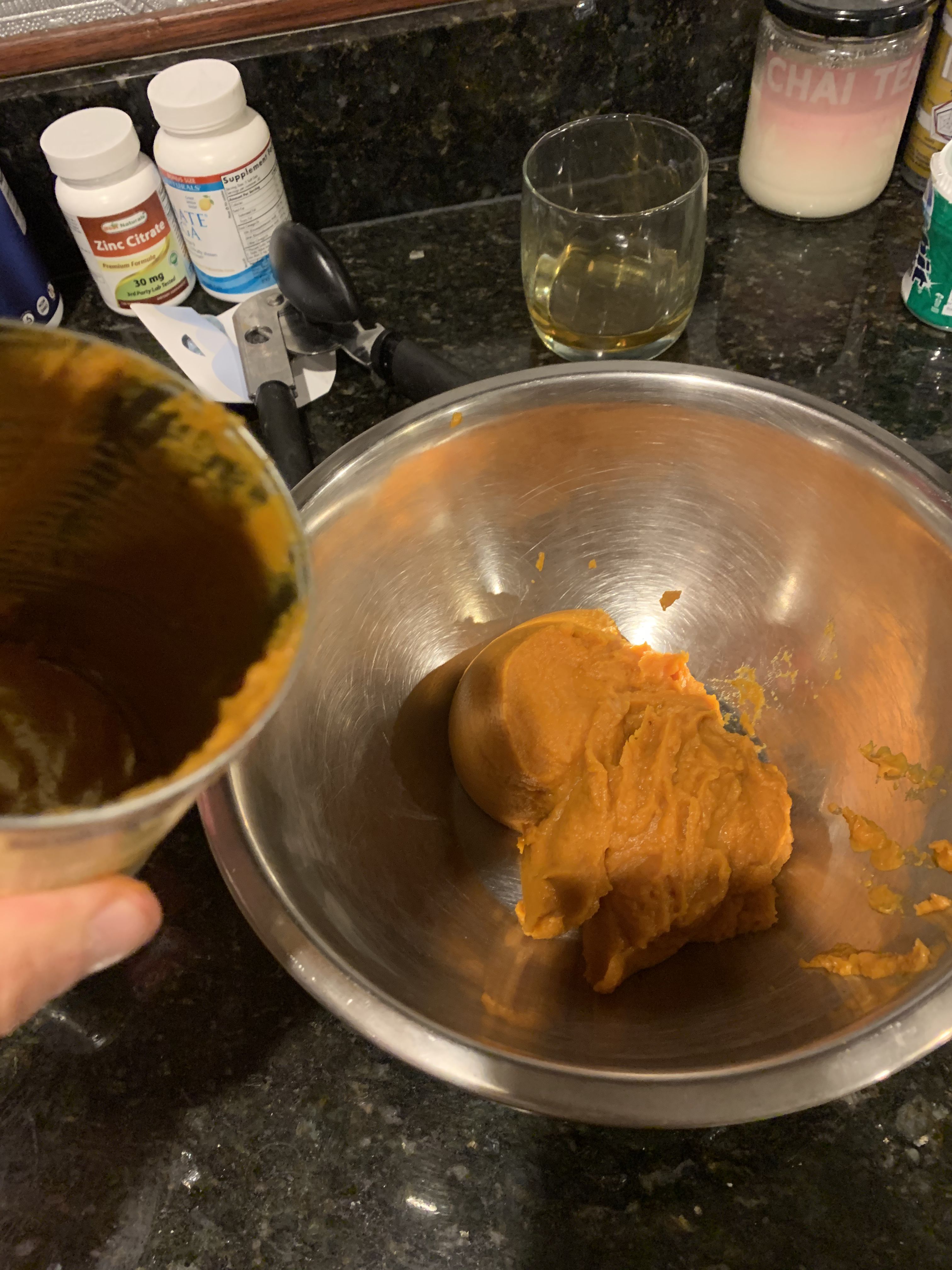 Really after that I just mixed everything together except the flour, so I made sure I got a sprinkling of baking powder (sometimes I throw in some baking soda too for good measure, and you can see I had it on the counter here, but I think this time I forgot. Let’s be honest we all know baking soda/powder don’t really do anything, they just make us feel better, right?), sprinkling of cayenne and paprika (those classic baking spices), and of course that butter. Mixed as well as I could, all in same bowl, all one spoon. At some point while pouring in the butter, a splish of hot butter landed in my whiskey behind the mixing bowl, and I gotta say it didn’t taste terrible. Store that info for later perhaps? 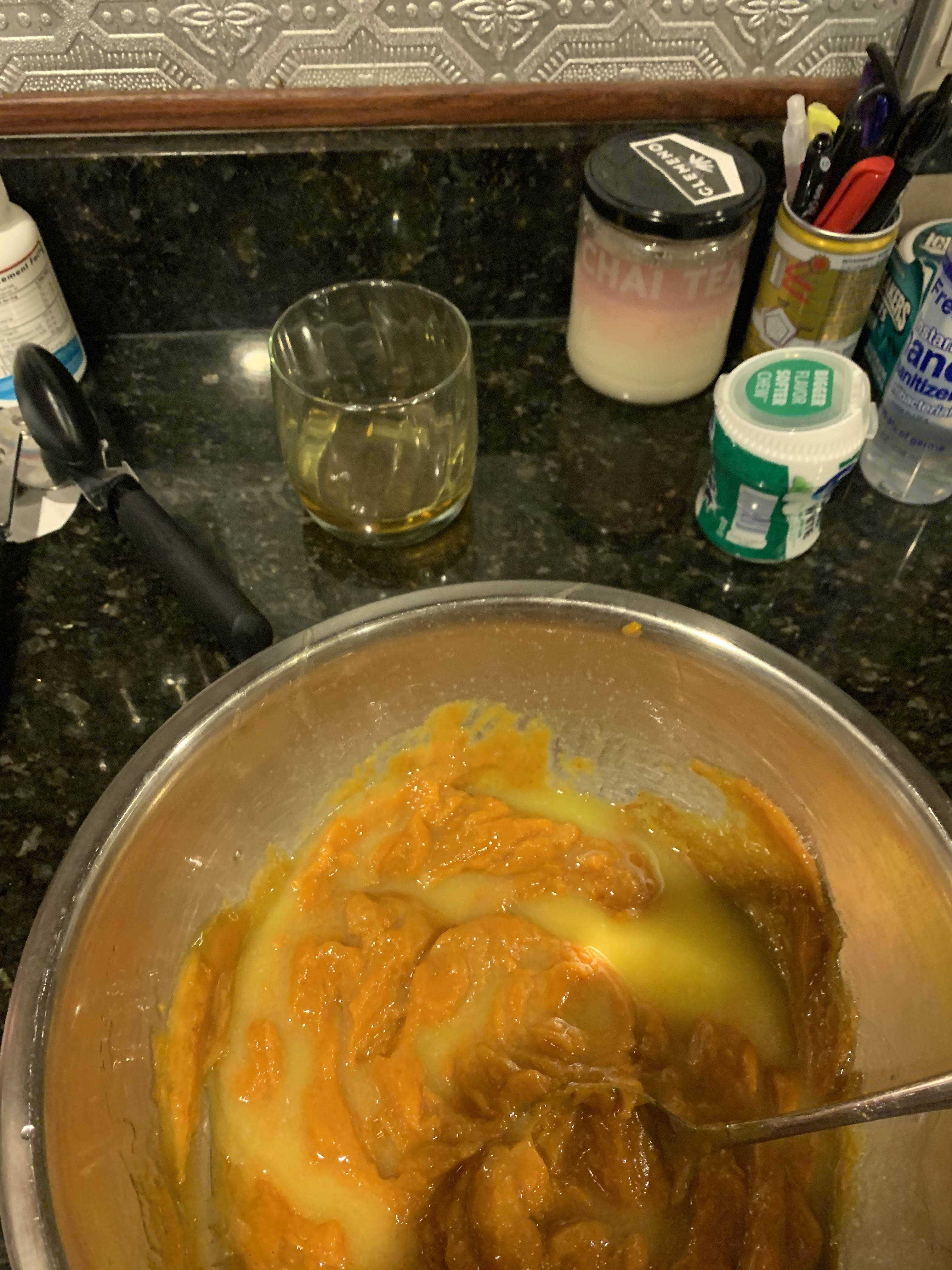 I added “a nice covering” of flour, without thinking too hard about it. It turned out to be enough to end up with a doughy mixture. If it had been to dry, I would’ve added more liquidy ingredients. Too wet, I would’ve added more flour. But I’m already rocking this intuition thing so it was fine the first time. Really there’s nothing to worry about! you just have to vibe. 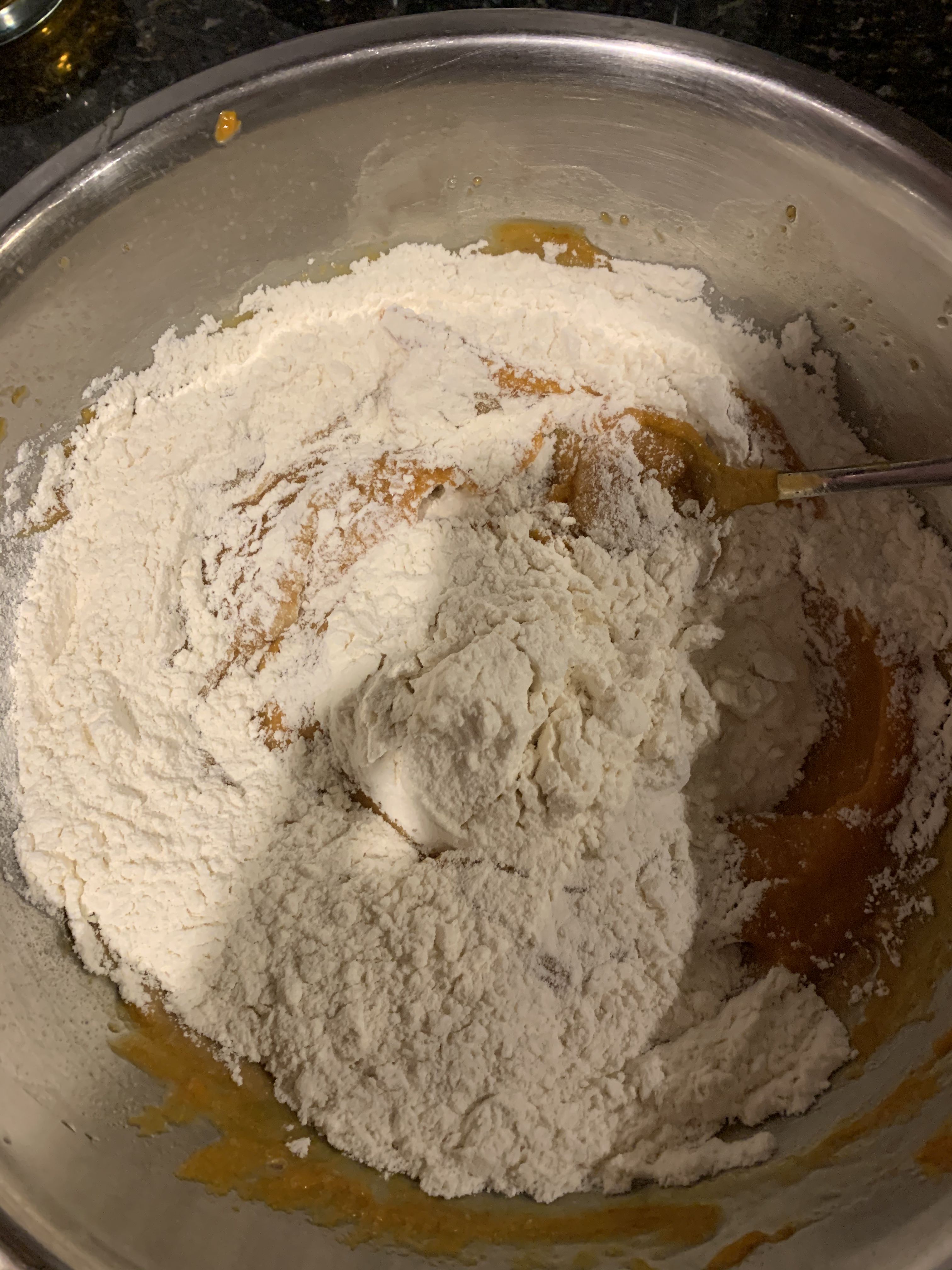 I set a timer on my phone for 25 minutes because it seemed like a good amount of time for some small but very wet globs of dough. After 30 the pokey stick came back not too wet so I took em out- 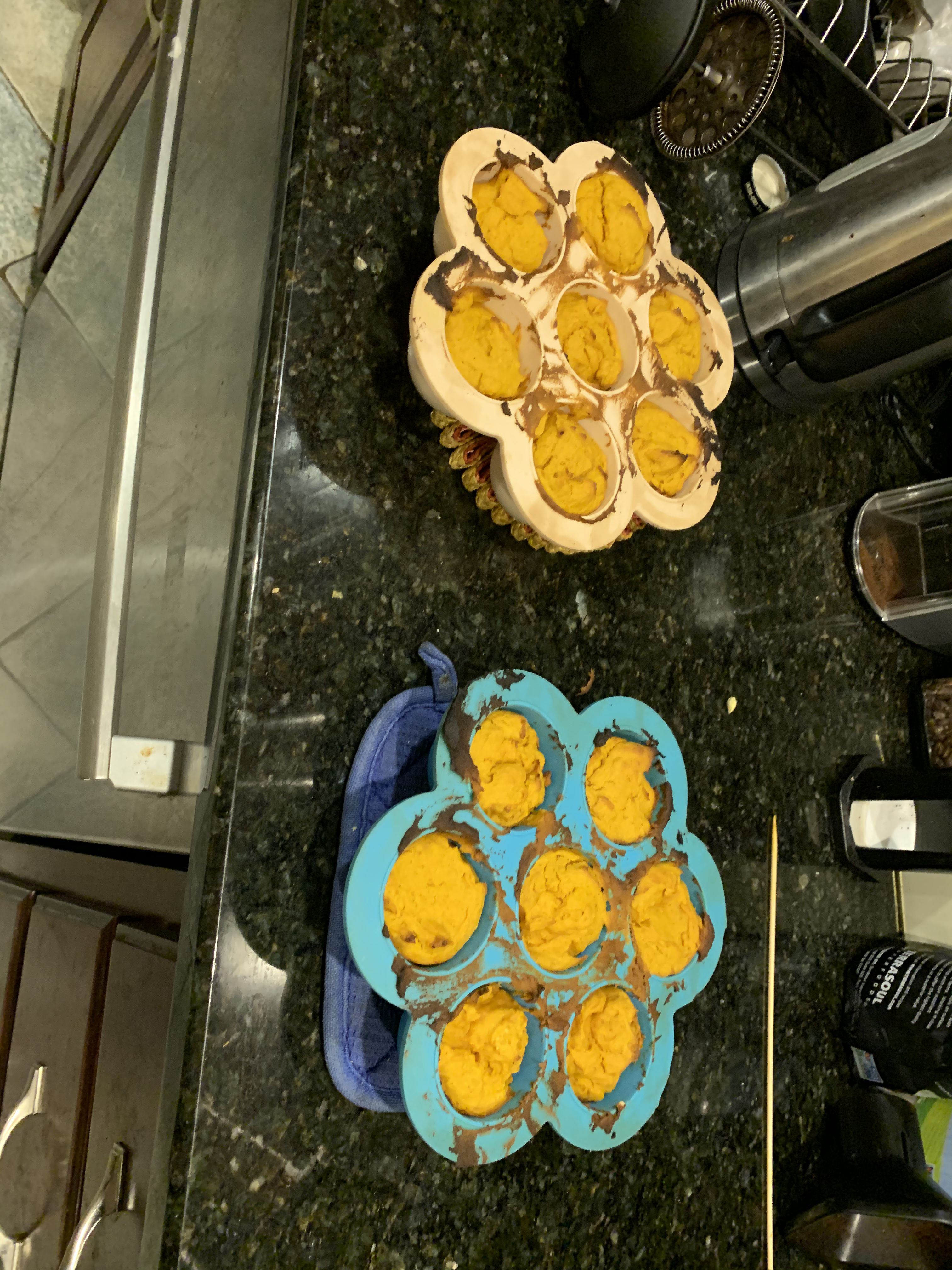 -but they were super gooey inside still: 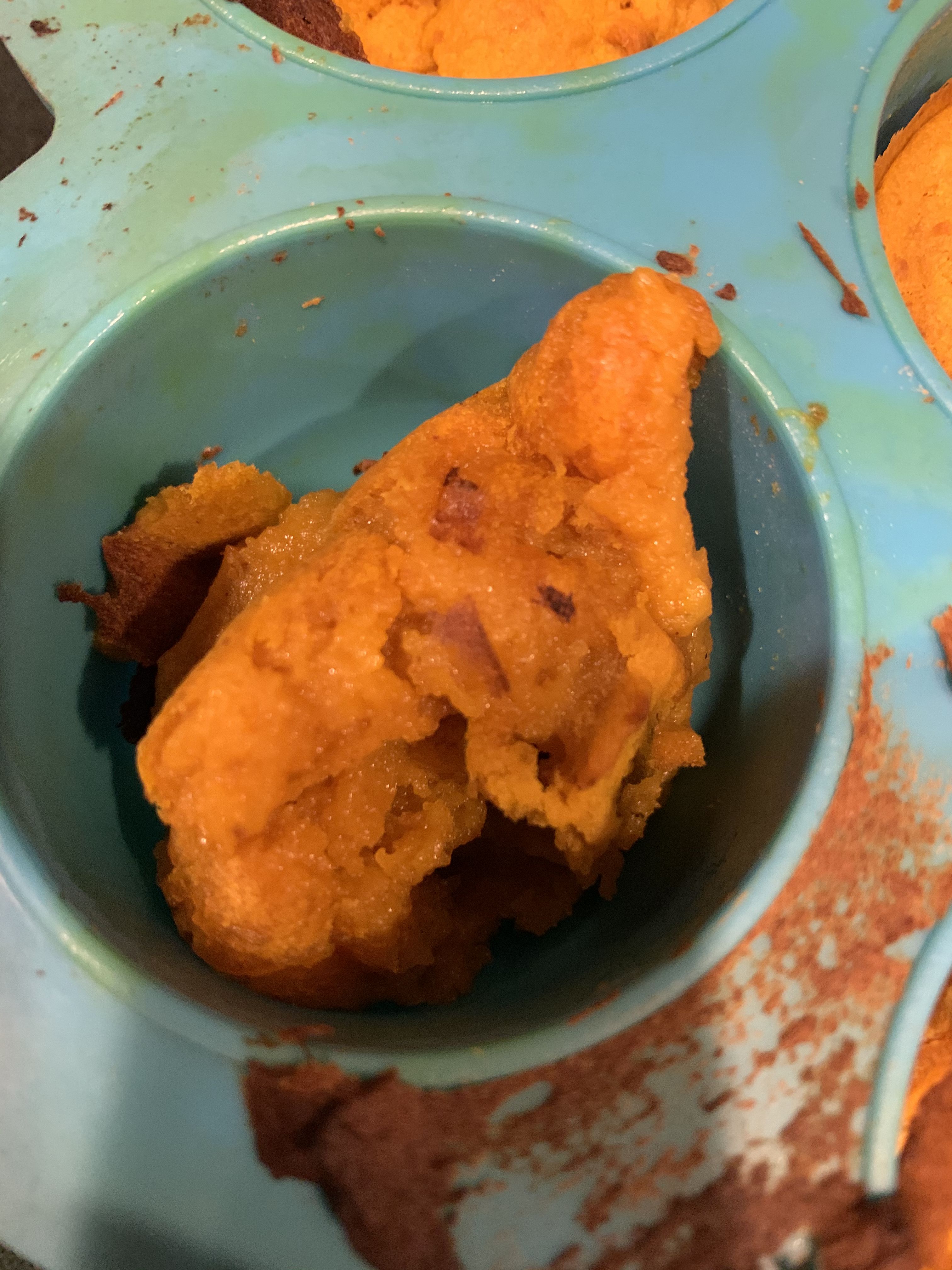 So I ended up leaving em another 25 all told. Finally they came out pretty nice and I sprinkled some powdered sugar and cinnamon on top to give them that nice, diseased look: 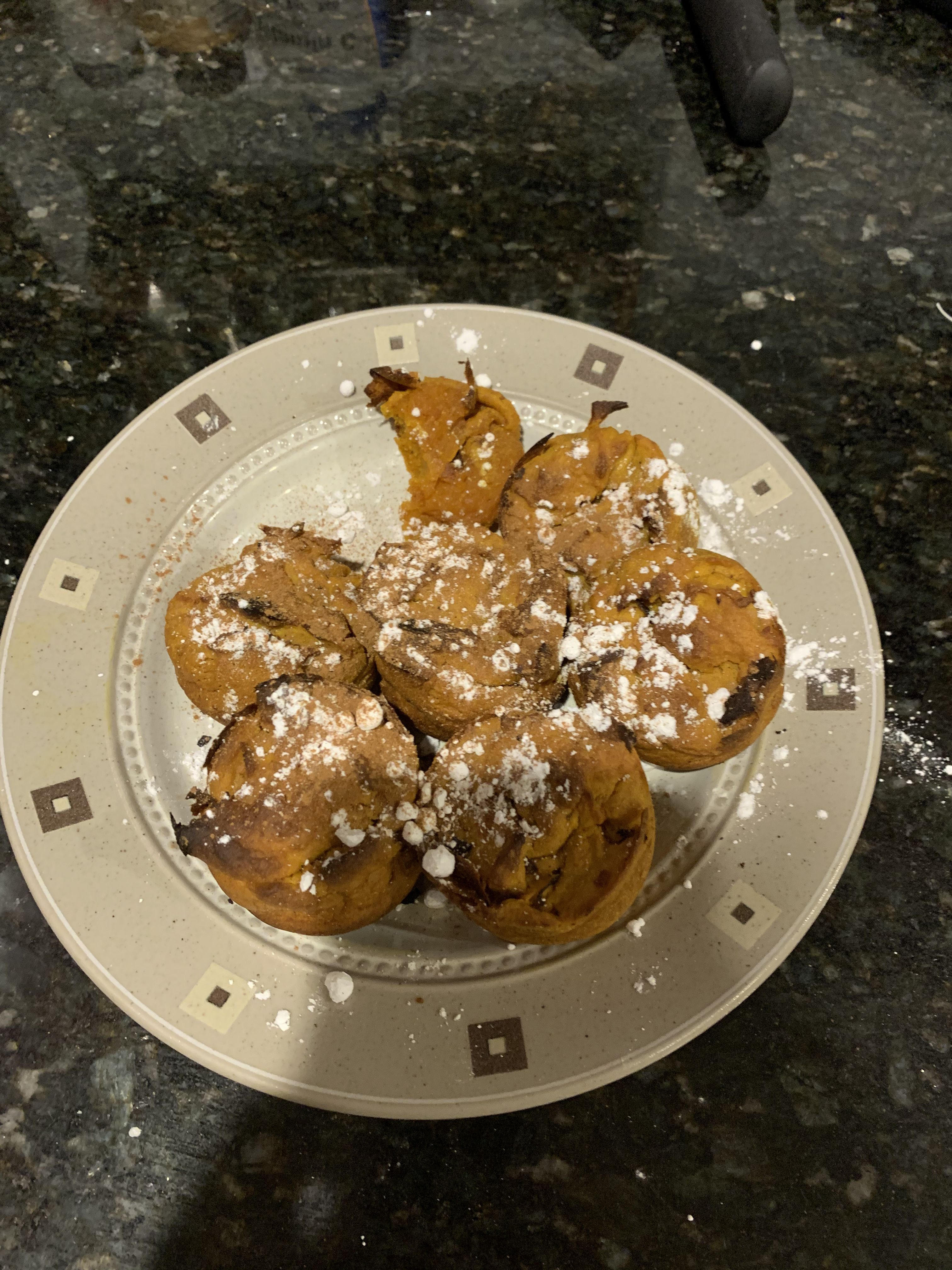 And I have to say, they were delicious, my wife was not displeased, and we all learned a thing or two.

I don’t know if this proves that everyone should try intuitive baking for themselves, but I’ve been doing this for 10 years already and it never ceases to entertain.

« Intuitive Cooking On Back Pain »